WebCasting: The Past 3 Months in Review

The past three months have been busy for AMC’s WebCasting team!  We’ve covered a variety of gigs, including a major music awards show, a Fashion Week Show, a jazz concert, and a telethon for the benefit of organizations such as Planned Parenthood.  Here are some of our highlights from the past couple of months! 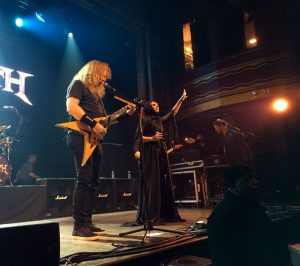 In December, AMC was able to provide WebCasting services for the Epiphone Revolver Music Awards.  The Revolver Music Awards Show honors the industry giants of the heavy metal scene.  Jose Mangin of SiriusXM’s Liquid Metal station, and Dave Mustaine, frontman of Megadeth, hosted the awards ceremony.   The show featured an impressive lineup of performances, including headliners Anthrax and Megadeth, as well as Zakk Wylde, Lacuna Coil, and Stitched Up Heart.  In addition to the musicians, Norman Reedus made an appearance to present the Revolver Music Innovator Award to Frank Bello, the bassist of Anthrax.  In addition to capturing gorgeous footage of the show, the AMC crew had a rockin’ time! 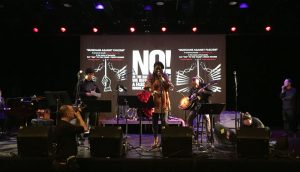 January brought two fantastic events for which AMC provided WebCasting services.  The first was a show entitled Musicians Against Fascism.  It was held on the eve of the inauguration for the benefit of a group called Say No to Fascism.  The concert featured several jazz musicians from the New York City area, including the host, 5-time Grammy winner Arturo O’Farrill.  O’Farrill is a composer, director, and pianist for the Afro Latin Jazz Orchestra.  Once again, the AMC crew was glad to listen to great music while shooting the concert. 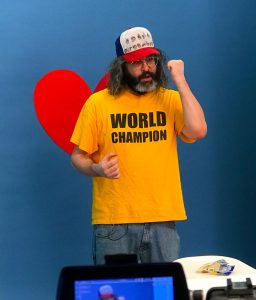 The Love-A-Thon also took place in January.  The Love-A-Thon was a three-hour telethon for the benefit of Planned Parenthood, the ACLU, and Earthjustice.  The three organizations are dedicated to protecting the rights of vulnerable populations.  Judah Friedlander, well-known comedian and self-proclaimed World Champion, hosted the Love-A-Thon, which was comprised of live interviews, sketches, video messages from the three organizations, and video messages from celebrities who could not make it to the studio.  Live guests included Dale Ho, the director of the ACLU’s Voter Rights Project; Lisa Garcia, the Vice President of Litigation for Healthy Communities at Earthjustice; and Dr. Leslie Cantor, the Vice President of Education at Planned Parenthood.  Celebrity guests who submitted videos included Jane Fonda, Rashida Jones, George Takei, and Misha Collins.  The Love-A-Thon was very successful, raising over $165,000 during the three-hour program! 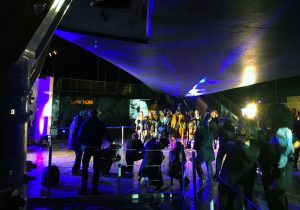 In February, AMC was pleased to provide WebCasting Services at Fashion Week.  Designer Chi Zhang’s Fashion Week debut was a runway show held aboard the Intrepid Sea, Air, and Space Museum.  The show’s runway circled The Enterprise Shuttle, and models danced down it to dubstep sporting Zhang’s latest collection.  The collection mirrored the casual air of the show, featuring many graphic tees and hoodies, as well as full-length leather and fur coats.  AMC shot great footage—both video and stills—of the show!

After such a packed few months, we’re looking forward to our upcoming gigs.  Our professional team can accommodate any event, from a bar mitzvah streamed to a few close friends and relatives, to large-scale concerts and shows streamed world-wide.  For more information about our WebCasting services, visit our website or call Bill Milling at (917) 414-5489.