Up and coming designer Chi Zhang made his New York Fashion Week debut in a stunning show aboard the Intrepid this week.  Zhang launched his clothing line in 2007 and has steadily built a following in the years since.  His Fashion Week runway show was live streamed, and The American Movie Company provided WebCasting services for the show.

Zhang held his runway show in the Space Shuttle Pavilion on the Intrepid where, despite the exclusivity of the location, the show had a casual air.  During the runaway part of the show, the models danced to dubstep down a runway that circled The Enterprise shuttle.

The collection was also more casual, featuring many graphic sweatshirts.  Most of the female models sported these sweatshirts, which sported Zhang’s slogan “King is Back,” and images of gas masks, among other graphics.  The male models wore long fur or leather coats without shirts underneath.  Both the male and female models wore sparse clothing on bottom, the men wearing speedo-like underwear or basketball shorts, and the women in short shorts or bikini bottoms.  Straps were a motif throughout the whole collection.  Many of the models had straps wrapped around their arms or legs or hanging loose from their sleeves. 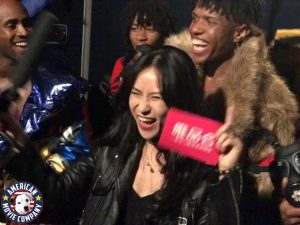 AMC had a full crew to accommodate the shoot.  Bill Milling produced the show and was on location as the production supervisor. Phil Fleischer doubled as the production’s Assistant Director and TriCaster operator, with Zack Breheney assisting with the TriCaster.  Arié Ohayon was the DP, and he led a seven-camera team consisting of Lou Blackmon, Loni Gest, Chris Lind, Jason Bergman, Govind Deecee, and Eduardo Torres.  RJ Yenesel served as the production Sound Mixer.  Jacob Getz, Laerke Roase Mollengard, and Pamela Hope were the production photographers, and Emma Broadbent shot behind the scenes footage.  Elle Kyle and Parmjot Girn served as Production Manager and Coordinator, respectively.

Thanks to the efforts and talent of the AMC team, the show went smoothly.  The crew captured gorgeous stills and video footage of the models as they took to the runway.  “We all had a good time working on such a fun project at such a cool venue!” Parmjot Girn commented.  “And more importantly, we were quite pleased with the footage we got.” 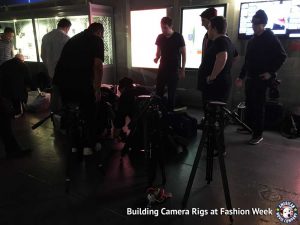